As a kid, I always loved sports and being active. Soccer, softball, tag- you name it. If there was something or someone to chase, chances are I was eagerly participating. Sure, I did all the usual “kid activities”, like swimming, piano, and tap dance (<–normal?), but my favourite by far was soccer. Once I stopped making daisy chains in the field, and started kicking the ball (or so my Dad says), I realized there was nothing more fun than kicking a ball around a muddy field with all my friends.

Okay so fast forward a few years, and thanks to a broken arm and a busier schedule, a few of the activities fell by the wayside, and I chose to pursue soccer and squash. Although I didn’t realize it at the time, replacing tap dance with squash was one of the best decisions I ever made. For those of you that aren’t familiar with squash, it’s pretty similar to racquetball, except it’s played with a longer racquet, a less bouncy ball, and a smaller court.

Sadly, in British Columbia (Canada), soccer is a winter sport, as is squash, meaning nearly every weekend I was either missing a squash tournament to play in a soccer game, or vice versa. Eventually I realized I couldn’t burn the candle at both ends, so in grade 9 I made the decision to commit solely to squash.

Switching to solely pursue squash proved to be a good decision, as it earned me a spot on the roster at Princeton University, where I competed (and studied!) for 4 years. After having my best-ever season as a senior, I chose to pursue my love for the game by training for the professional tour.

Squash in itself is a pretty good workout, but I soon realized that simply playing squash wasn’t going to give me the physical conditioning necessary to keep improving. Spin classes became my go-to method for cross-training, complemented by the “Fitness and Conditioning” strength training class I took in high school.

After a few years of spinning on a stationary bike, a friend convinced me to buy a road bike, promising that “biking is more fun when you’re actually going somewhere”. For several months, I rode my road bike mainly as a means of commuting and training. After freshman year, one of my cousins asked me to race the 20k cycling leg of a sprint triathlon relay, to which I happily agreed. For those of you that have done a triathlon, perhaps you can agree that the most exciting parts of the race are the start and the finish. Having completed neither, I didn’t get any of that thrill, and felt kind of cheated out of the experience.

I went on to complete a sprint distance triathlon later that summer, followed by an Olympic distance tri the following year. As an athlete who had not swam laps in quite literally years, the return to the pool was quite a (cold) shock. Nevertheless it was a challenge that I embraced and conquered. (By “conquer”, I mean “not drowning”).

In between squash competitions and triathlons, I spent my spring semesters at Princeton training and racing for the club cycling team. Cycling inevitably became one of the best ways to get quality “me” time, as I could head out for an hour or two after a long day of class, put an earbud in one ear, and just ride throughout the Jersey countryside. Some people find comfort in curling up with a good book or taking a yoga class- I enjoy going for a long ride (or run) to clear my mind.

In 2013 I “officially” got Spin certified, and began teaching classes at university. After about a year of teaching spin, I realized not only how much I love health and fitness, but also how much I enjoy motivating others to achieve their best, healthiest, and happiest state. 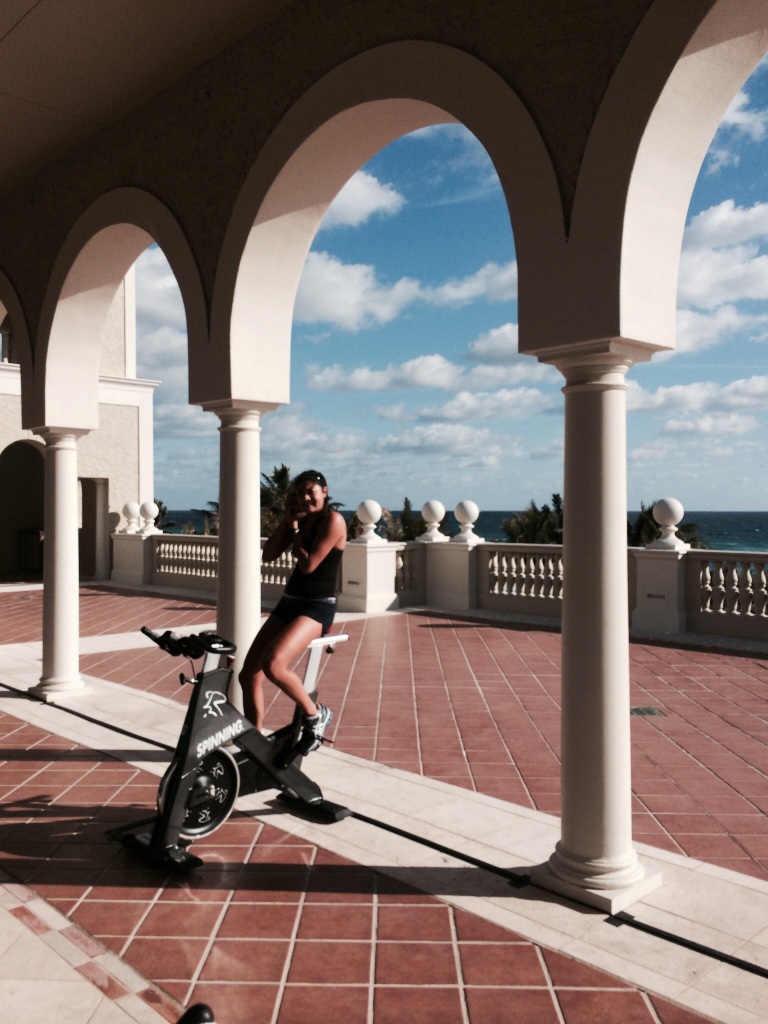 Following graduation, I realized that this profession was something I needed to pursue immediately. I took my NASM certification, and began working as a fitness coach at Body Space Fitness, where I currently train clients and teach classes. Working as a health and fitness professional allows me to not only share my knowledge, but to also learn from my colleagues, students, and clients. Plus- I get to wear workout clothes all day long! 🙂

Welcome to Squash on Squash!

Hey, I'm Nicole. I'm a Canadian pro squash player and fitness/squash coach based in NYC. Thanks for stopping by, and check out My Story to learn more about me!